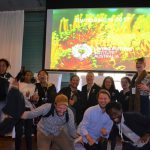 The highlight of the UnSymposium for me was watching the winning group of university students present their proposal at the close of their design competition. I remember the design question they were responding to was something like ‘How would you propose to restore and attract people to Quarantine Beach?’ While the other student’s responses were also inspired, this particular group stood out because their reaction to the question was to physically do very little. They didn’t build any new buildings, they chose to utilise what was already there. If I remember correctly they focused on the purpose of the place; restoring the original function of a hospital but for wildlife instead of people so that they could heal and return to the bush. This meant the bush was also replenished as part of the beautiful cycle they’d designed.

I loved that their focus was to design how people would work together, what they’d be focused on restoring, and not the buildings they ‘needed’ to do it. Judging by the tisks of distaste I heard from the person sitting next to me, she believed this to be a lazy response ‘is that what they’ve done in 5 hours?’ she asked no-one, with an air of disapproval rather than amazement. Admittedly their images were juvenile and I remember thinking ‘Hey, they were like me at architecture school, good at some things but a bit crap at drawing!’ But THEN they revealed that they’d included the primary school students in their design process, who were participating in another session. They recognised that in order to design for the future, they needed to include the one’s who’ll be left to live it. I was thrilled for two reasons;
1. The woman next to me quietened and I was able to enjoy my UnSymposium highlight in peace
2. Too often, current responses to ‘sustainability problems’ are to develop a new technology or build another building to support our over indulgent lifestyles. I was left with a sense that the next generation of design thinkers are heading away from this, to a good place.

You can read the student perspective in the blog by Tessa Verkerk.