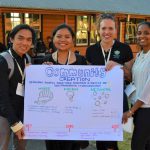 The arrival of the morning ferry meant an early wake up and a casual stroll through the morning bustle to arrive with the fellow UnSymposium students and visitors for the Symposium conference at the Man o’ War Steps. The boat ride consisted of storytelling by Aunty Fran, a descendant of the D’harawal people of the Bidiagal clan. Having not previously been exposed to this type of storytelling, this was a foreign concept to me. One of the many stories that Aunty Fran was able to share with us was about the way the birds got their colours through flying through the rainbows. The reason why this story stuck to me, was at first these birds were sad and dark, then through the rainbows created colour and vibrancy. I would like to think that we all do that one day; come out of our comfort zone and reap the rewards. Once docked on Quarantine Station Warf, the event opened up with two speakers where some of the key themes discussed included sharing an obligation to create a more sustainable future, the responsibility to encourage a change in behaviour, and sharing your values.

The first speaker was Tony McAvoy, who spoke about taking into account the history of the place and incorporate it back into the community. Without sharing the responsibilities and accountability, what is the point of being a community? The barrier to having a socially just future is not impossible, the only thing that is stopping this is our behaviour.

One of the key messages that spoke to me personally was the idea presented by Kirsti Luke: “The world is not created through equality so why present this idea within a house?” Each and every house should be different, have its own unique features and environment; just like the way nature has intended it to be. This works on a global stage as well, as houses that are built in Australia cannot simply be placed in the middle of Europe; something I could definitely relate to. Each speaker was wonderful in the way they presented their stories and definitely made me excited to see what the rest of the day had in store for us!

Upon the commencement of the Symposium, the students were taken away and the challenge was finally presented to us. A Living Future is to be created for the Northlands of Manly. Taking into account the history and the ever-growing population of Sydney we were encouraged to consider what the Manly council could do to redevelop the area. The brief; as big or as small as you wish it to be.

Initially we started off with a big brainstorm as a team to gain an overall perspective of the project and its scope. We were able to choose the teams ourselves which was extremely helpful as this allowed for teams with similar insights and values – returning back to the concept of accountability and responsibility earlier mentioned by the key speakers; taking ownership of the project.

Upon the completion of the five hours, these ideas were then presented to a panel of three judges. Some of the ideas presented were to create the Manly North head as an educational environment; one for relaxation and coming back to nature. Another team created a resort style environment where revenue is raised through tourism.

Our idea was based primarily on Kirsti’s story- design for what you have in front of you, not what you wish to be there. We wanted to develop a connection with nature once more, create more space and integrate the idea of community back into the Manly North head area. All ideas presented incorporated all the aspects we had learned throughout the day using the history to create the foundation of our blue prints. The challenge as a whole prompted creativity and encouraged the students to think outside of the box

I feel so honoured to have been chosen to participate in the UnSymposium, not only was I able to learn from some of the most inspiring people in the field, it challenged me to let go of my Engineering “be realistic” mind-set and start questioning the conventional. The connections that were able to be made have not only helped me to grow as an engineer but also helped with the Desert Rose project we are currently working on.