A Legacy of Hope

By LFIA TeamDecember 5, 2014Uncategorized
No Comments

We pay tribute to our treasured colleague Dr Chris Reardon, a LFIA member and champion for sustainability, who passed away last month. As his long-time friend and collaborator, Dick Clarke, explained, “He died sitting at his desk, no doubt mid way through penning some insightful piece aimed at prolonging harmonious human existence on this planet, when his heart appears to have had other ideas.”

Chris was a tireless, passionate and influential campaigner for sustainability. With a background in ecology and building design, he was designing and advocating for sustainable housing way before the concept had any mainstream traction. But his role as a change agent didn’t stop there.

Chris loved to share his passion and skills. Over the past two decades he trained thousands of architects, designers and builders around Australia. He played an instrumental role in the development of several influential sustainable housing training programs, including the Housing Industry Association’s GreenSmart. As a trainer he was renowned for his insight, infectious passion and love of a good argument.

Chris worked tirelessly to influence policy, sitting on various Commonwealth and State government committees as a representative of the Building Designer’s Association. His influence was remarkable, perhaps a sign of the respect he generated within industry and government circles. According to many who witnessed Chris in action, he “punched well above his weight” and wasn’t afraid to fight for what he believed was right.

Chris may well be the only Australian to win two Banksia awards, another sign of his groundbreaking influence as a change agent. The first was for Your Home, the comprehensive guide to sustainable housing, now in its fifth edition and considered a go-to reference for the industry and the public alike. Your Home won a number of awards after its publication. Chris, then working for the Institute for Sustainable Futures at UTS, was the primary author of Your Home and led the team of experts who were responsible for its creation. The second award, bestowed only weeks before he passed away, was for the Liveability program that Chris developed and implemented with LJ Hooker change agent Cecille Weldon. Chris had often said that real estate agents were a key part of the solution in creating demand for sustainable housing. The award was a fitting tribute, and a testament to Chris’s ability to create the change he wanted to see.

As if his incredible success as a change agent in the industry wasn’t enough, Chris made the brave move of undertaking a PhD at the Institute for Sustainable Futures, exploring “The diffusion of sustainable practices within the Australian housing industry”. His thesis is a formative work that has informed a number of policies and programs.

Chris was my mentor and friend. He taught me just about everything I know about sustainable housing and gave me the opportunity of a lifetime when I joined him on the Your Home team in 2000. He was sharp, funny, insightful and generous. He loved a good debate, and fought enthusiastically for what he believed in. He was passionate about the LFIA’s focus on regenerative development and in recent years was planning to donate his time and skills to sustainable building in developing countries.

Chris was truly ecological in spirit. He understood the interconnectedness of all things, and the profound responsibility it is to be human. And, most importantly, he acted on it. Chris, it is people like you who make the world a wonderful place and give us hope. You are an inspiration, and your legacy will live on. 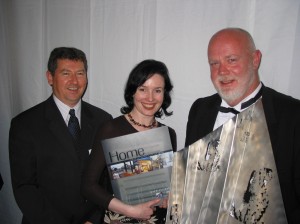